The Clean Coder: A Code of Conduct for Professional Programmers 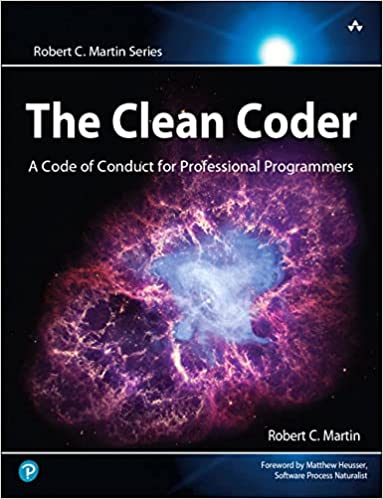 An estimate is a distribution.
Do not commit unless you know you will succeed.
If you change your behaviour in a crisis, then you don't trly believe in your normal behaviour.
Don't Panic - rushing causes more problems. Slow down and plot out the best possible outcome.
When the going gets rough, trust your disciplines. If you follow TDD, write more tests than usual. If you are a merciless refactoere, refator even more.
Rely on what you already knw works.
'...cocoonlike immersion of focus.'
Understand the code you are writing and how the business will benefit from it.

Here is a minimal list of the things that every software professional should be conversant with:

Build test code first, make test cases and when they fail, build the code to make them work. Then test again. If it fails, write more code.
In order to do so I would need to separate the front end from the code.  I would have to start by laying out the public side of the page. Then layer on the code to make it work. Then layer on the admin code to make the page work (where applicable).
Professionals are not required to say yes to everything that is asked of them. However, they should work hard to find creative ways to make “yes” possible. When professionals say yes, they use the language of commitment so that there is no doubt about what they’ve promised.

Coding is an intellectually challenging and exhausting activity. It requires a level of concentration and focus that few other disciplines require. The reason for this is that coding requires you to juggle many competing factors at once.

Communication about details is hard. This is especially true for programmers and stakeholders communicating about the details of an application. It is too easy for each party to wave their hands and assume that the other party understands. All too often both parties agree that they understand and leave with completely different ideas.

The only way I know of to effectively eliminate communication errors between programmers and stakeholders is to write automated acceptance tests. These tests are so formal that they execute. They are completely unambiguous, and they cannot get out of sync with the application. They are the perfect requirements document.

At the bottom of the pyramid are the unit tests. These tests are written by programmers, for programmers, in the programming language of the system. The intent of these tests is to specify the system at the lowest level. Developers write these tests before writing production code as a way to specify what they are about to write. They are executed as part of Continuous Integration to ensure that the intent of the programmers’ is upheld.
Unit tests provide as close to 100% coverage as is practical. Generally this number should be somewhere in the 90s. And it should be true coverage as opposed to false tests that execute code without asserting its behavior.

These are some of the acceptance tests mentioned in the previous chapter. Generally they are written against individual components of the system. The components of the system encapsulate the business rules, so the tests for those components are the acceptance tests for those business rules
As depicted in Figure 8-2 a component test wraps a component. It passes input data into the component and gathers output data from it. It tests that the output matches the input. Any other system components are decoupled from the test using appropriate mocking and test-doubling techniques.
Component tests are written by QA and Business with assistance from development. They are composed in a component-testing environment such as FITNESSE, JBehave, or Cucumber. (GUI components are tested with GUI testing environments such as Selenium or Watir.) The intent is that the business should be able to read and interpret these tests, if not author them.
Component tests cover roughly half the system. They are directed more towards happy-path situations and very obvious corner, boundary, and alternate-path cases. The vast majority of unhappy-path cases are covered by unit tests and are meaningless at the level of component tests.

These tests only have meaning for larger systems that have many components. As shown in Figure 8-3, these tests assemble groups of components and test how well they communicate with each other. The other components of the system are decoupled as usual with appropriate mocks and test-doubles.
Integration tests are choreography tests. They do not test business rules. Rather, they test how well the assembly of components dances together. They are plumbing tests that make sure that the components are properly connected and can clearly communicate with each other.
Integration tests are typically written by the system architects, or lead designers, of the system. The tests ensure that the architectural structure of the system is sound. It is at this level that we might see performance and throughput tests.
Integration tests are typically written in the same language and environment as component tests. They are typically notexecuted as part of the Continuous Integration suite, because they often have longer runtimes. Instead, these tests are run periodically (nightly, weekly, etc.) as deemed necessary by their authors.

These are automated tests that execute against the entire integrated system. They are the ultimate integration tests. They do not test business rules directly. Rather, they test that the system has been wired together correctly and its parts interoperate according to plan. We would expect to see throughput and performance tests in this suite.
These tests are written by the system architects and technical leads. Typically they are written in the same language and environment as integration tests for the UI. They are executed relatively infrequently depending on their duration, but the more frequently the better.
System tests cover perhaps 10% of the system. This is because their intent is not to ensure correct system behavior, but correct system construction. The correct behavior of the underlying code and components have already been ascertained by the lower layers of the pyramid.

This is where humans put their hands on the keyboards and their eyes on the screens. These tests are not automated, nor are they scripted. The intent of these tests is to explore the system for unexpected behaviors while confirming expected behaviors. Toward that end we need human brains, with human creativity, working to investigate and explore the system. Creating a written test plan for this kind of testing defeats the purpose.
Some teams will have specialists do this work. Other teams will simply declare a day or two of “bug hunting” in which as many people as possible, including managers, secretaries, programmers, testers, and tech writers, “bang” on the system to see if they can make it break.
The goal is not coverage. We are not going to prove out every business rule and every execution pathway with these tests. Rather, the goal is to ensure that the system behaves well under human operation and to creatively find as many “peculiarities” as possible.

Programmers are detail managers. That’s what we do. We specify the behavior of systems in the minutest detail. We happen to use textual languages for this (code) because textual languages are remarkably convenient (consider English, for example).
What kinds of details do we manage?
Do you know the difference between the two characters \n and \r? The first, \n, is a line feed. The second, \r, is a carriage return. What’s a carriage?
In the ’60s and early ’70s one of the more common output devices for computers was a teletype. The model ASR33[2] was the most common.
[2] http://en.wikipedia.org/wiki/ASR-33_Teletype
This device consisted of a print head that could print ten characters per second. The print head was composed of a little cylinder with the characters embossed upon it. The cylinder would rotate and elevate so that the correct character was facing the paper, and then a little hammer would smack the cylinder against the paper. There was an ink ribbon between the cylinder and the paper, and the ink transferred to the paper in the shape of the character.
The print head rode on a carriage. With every character the carriage would move one space to the right, taking the print head with it. When the carriage got to the end of the 72-character line, you had to explicitly return the carriage by sending the carriage return characters (\r = 0 × 0D), otherwise the print head would continue to print characters in the 72nd column, turning it into a nasty black rectangle.
Of course, that wasn’t sufficient. Returning the carriage did not raise the paper to the next line. If you returned the carriage and did not send a line-feed character (\n = 0 × 0A), then the new line would print on top of the old line.
Therefore, for an ASR33 teletype the end-of-line sequence was “\r\n”. Actually, you had to be careful about that since the carriage might take more than 100ms to return. If you sent “\n\r” then the next character just might get printed as the carriage returned, thereby creating a smudged character in the middle of the line. To be safe, we often padded the end-of-line sequence with one or two rubout[3] characters (0 × FF).
[3] Rubout characters were very useful for editing paper tapes. By convention, rubout characters were ignored. Their code, 0×FF, meant that every hole on that row of the tape was punched. This meant that any character could be converted to a rubout by overpunching it. Therefore, if you made a mistake while typing your program you could backspace the punch and hit rubout, then continue typing.
In the ’70s, as teletypes began to fade from use, operating systems like UNIX shortened the end-of-line sequence to simply ‘\n’. However, other operating systems, like DOS, continued to use the ‘\r\n’ convention.
When was the last time you had to deal with text files that use the “wrong” convention? I face this problem at least once a year. Two identical source files don’t compare, and don’t generate identical checksums, because they use different line ends. Text editors fail to word-wrap properly, or double space the text because the line ends are “wrong.” Programs that don’t expect blank lines crash because they interpret ‘\r\n’ as two lines. Some programs recognize ‘\r\n’ but don’t recognize ‘\n\r’. And so on.
That’s what I mean by detail. Try coding the horrible logic for sorting out line ends in UML!