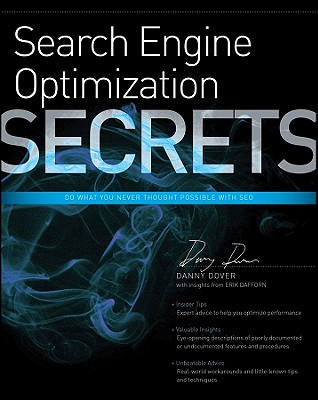 Search Engine Optimization Secrets: Do What You Never Thought Possible with SEO

The easiest way to get involved with these communities and meet people is to interact with them online. I recommend starting to read and comment on SEO blogs. The most popular SEO blogs at the time of writing include:
----

At this point you are probably wondering how much you can charge for your services. Unfortunately, this is a very difficult question. It depends on your skill level, your reputation, your local market, your currency, and the time of year. In this section I do my best to explain how SEOmoz came up with their prices, and I try to use a multiplier to help make this more useful to people in different circumstances.

7.5.1. Your Skill Level and Reputation (Multiplier)

The following price ranges are estimates and may vary depending on a multitude of factors including demand for SEO, geographic location, client knowledge of SEO, client size, client reputation, client resources, and/or time. All prices are in U.S. dollars.

This number is completely dependent on the quality of the link. The preceding number would be for a relevant link that passes a mozRank of about 5.00.

This number is extremely dependent on popularity of the brand and the amount of work you do for them. This number is based on SEO brand SERP work and social media services. For example, this might include helping a website outrank a competitor who is spreading damaging information about the given brand.

This is completely dependent on the task and will vary widely. These tasks might include doing analysis of analytics, running training workshops, checking or writing code for search engine friendliness, gathering data, or writing up a SEO strategic plan. Price will depend on the specialized skills required for the task and the amount of time it takes to complete. The further outside the scope of traditional SEO deliverables, the higher the price.

At the time of writing the image, the search is still in its infancy. The problem is that an image file is very different from a text document from the perspective of a computer scientist. The technological problems of searching for relevant text in a corpus of all text have largely already been solved.

Images are a completely different story for two primary reasons. First, image files are on average much larger than text files. Whereas a text document may be made up of thousands of 0s and 1s on the binary level, an image with the same dimensions may be made up of hundreds of millions of binary characters. This means that the computing power alone can become a bottleneck to solving the image search problem.

Secondly, algorithmically determining the meaning and contents of an image file is much more difficult than doing the same for a text file. Whereas a word may have only a few meanings and contain very little, an image can have millions of meanings and contain many objects. Imagine the difference between the word "crowd" and an image of a crowd. Although the word maps to the idea of a large group of people, the details of those people are not represented. This is not the same for an image of a crowd where the details of each person in the crowd are visible.

This of course is an oversimplification of the image search problem but it helps to illustrate its complexity. As a result of the complexity of these two factors (size and meaning/contents), search engines have relied on text-based metrics to rank images.

To make matters worse, these technical issues fail to address the social implications of image search. Whereas most search queries are done with the intention of getting information, the queries where images are the best result tend to aid people in stealing images. From an SEO perspective, this leads to the question of whether or not image search–referred traffic is even useful.

This is the most common question I get when talking to clients about image search. They are right in that many image searches result in the user simply stealing the image and not giving credit to the owner or the site where it came from.
My initial answer to this question is two-pronged:
In order for this to happen, there needs to be a way to represent images for those who are visually impaired and those systems that can't understand them (which includes search engines). The best way to do that today is to optimize images just like SEOs do for a website as a whole.

I am a big fan of the underdog. At the time of writing, Google dominates online search and advertising. Thus, I get excited when I see formidable competitors.
Bing, though much less popular than Google, is winning the race to build the best image search engine. It provides more relevant results in an easier-to-navigate interface. For example, Bing image search presents an AJAX driven result set that uses scrolling rather than pagination to view additional images (see Figure 11-3). This prevents unnecessary page loads and makes it easier to use (and it's one of the reasons why Google recently created a very similar image results interface).
This is a fact that more and more people are realizing. I always use it as my preferred image search engine, and its popularity is growing.

A lot of the technology behind Bing image search and Bing maps is coming from Microsoft Research. This think-tank style department has made amazing strides forward with image technology in the past few years. As an SEO you should be aware of this trend and not be blindsided when it makes an impact on future search-referred traffic.

Although there is much research on image search metrics compared to other search verticals, most experts agree the majority of image ranking metrics are related to those that are listed in this section.

The code to include an image file in HTML takes the following format:
The parameter in the alt attribute (in this example, Alt Text) is displayed in the event that the image cannot be represented. This happens when the technology accessing the tag cannot display the image. This is most common when the image is broken or when it is accessed by software like a screen reader.
This text typically describes the image and is a very good ranking factor.

Many times the text that surrounds an image in a web document describes the image. This can take the shape of a caption or introduction to the image.
This information is very useful for image search engineers. It is relatively common for an image to rank for a query that matches the text around an image.

In theory a filename should always describe its content. Unfortunately, this is not the normal case for image files. Many times they will be named by a computer (like a digital camera) rather than a human. This makes this a relatively poor metric for rankings.
That said, it does help to include descriptive words in image filenames because it is still used as a minor factor in image search rankings.

It is important to note that the search engines still use normal ranking metrics for images (relevancy and popularity). This is usually done on the page where the image is located. (Note this is different than the image URL.)
This means that by optimizing a page in the normal ways, you are also optimizing its images. It is a win-win situation.

All of your work performing tests will be futile if you don't take the time to appropriately record your results. I learned this the hard way when I was asked by a client about a specific test I had run six months earlier. I checked back through my handwritten notes and couldn't figure out the configuration of the test or what the results of it had been. I ended up having to rerun the entire test and redo all the work I had already done.
Although you can collect any data points you want, I suggest including at least all of the points in the following list.